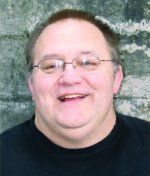 Jeffrey Ford is the author of science fiction and fantasy books such as Crackpot Palace.

Writer's block—who knows what it is? Could it be from lack of confidence, laziness, mental anguish, a curse put on you by someone you wronged? In other words, you're not writing anything worth a damn or you're not writing anything. You sit there and stare at the blank screen or go on the Internet and fritter your time away. Hard to prescribe any cures for anyone else on this one. Hard because I'm not sure why you're not writing, and hard to prescribe because, basically, I don't know any cures for it. As far as I know the evil must run its course.

In the meantime, though, there are all kinds of things you can do to pretend you're doing something before you start writing again. You can use meditation, go for a long walk, get loaded, do jumping jacks. One thing I've heard a number of writers say is that they just start typing any gobbledygook that comes into their head. Even if it never turns into something worthwhile, at least you keep your typing skills sharp. Every writer is idiosyncratic in their process, so what works for one may not work for another. This is one of those things you have to dope out for yourself—or at least just suffer through by yourself. It's all part of the game. If you want to be a writer, you have to deal with all of it.

One thing I do know is that writers spend a lot of time in their own heads, overly concerned with their own thoughts. I'd like to think that if you left your chair for a little while and went out in the world and did something for someone else, whether you know them or not, that might free things up a little. And even if it doesn't, you've still done something worthwhile with you time. Just like the spaces between paragraphs are as important as the text that's in them, for a writer, not writing is an important part of writing that a writer should pay attention to.

"Writing prompts" is MFA terminology I never got into simply because I never pursued an MFA. It sounds kind of phony to me. What are we talking about here—like ripping pictures out of a magazine and then looking at them and wondering what kind of story might be behind the figures and the objects in them? If it takes that much effort to come up with a story idea, maybe it's better to take up string art. On the other hand, if it works for you, more power to you. The only thing along these lines that worked for me in the past is when I consciously left the smoking patch on when I went to sleep. It gives you really fucked up weird dreams, really vivid. I've gotten a few story ideas from that, but not so many that it was worth doing or worth smoking to put myself in the position to be wearing a smoking patch in the first place. Story ideas just come to me when they're ready to. I could be driving in my car, shopping at the grocery store, cooking dinner for the family, putting the garbage out, walking the dog. I'm not very critical of them when they rear their crazy heads. I let them appear and play themselves out and watch what happens. Sometimes they entrance me, sometimes they bore me, sometimes they seem maddeningly hard to put into words. The better ones, I try to write down. The difficult ones I put back in the brain oven and let them cook a little more. The bad ones, I try to get rid of, but they're not so easy to get rid of always. Hey, whatever works for you, do it.

The most important revelation to come to me as a young writer had to do with the importance of revision. I had been introduced to it by John Gardner when I was studying with him at SUNY Binghamton. He'd go through a story with me, cutting lines with a pencil and we'd talk about what I could have done differently, what I was going for, what I wanted or saw. He told me, "You'll know when you really get the idea of revision, you'll feel it. The act of revision will become as exciting or more so than the initial creation of the story." I did feel it eventually, about five years after I'd left Binghamton and Gardner had passed away. I still remember the moment. It was summer. I'd been writing all day on a story that I felt had something going for it but what it had was muted, sort of like it was wrapped in five layers of gauze. Then the idea of what it needed came to me clearly and the prospect of the work it would entail to free it truly filled me with a kind of joy and excitement. I literally had to sit down, I was so overwhelmed. Soon after that time, I started publishing pretty steadily.
Subscribe to our email list Explore Our Classes