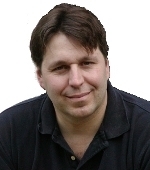 R.A. Salvatore is the author of fantasy novels such as the Neverwinter Saga and The Sellswords series.

I tape my mortgage statement to the side of my computer and start hitting the keys. Seriously, I don't believe in "writer's block." I really don't. I consider it an excuse for procrastination and/or a lack of confidence, and a professional writer has no time for either. Writing may be about creativity, but being a professional writer is also about discipline. Sure, there are times when you just don't feel like writing, when there's nothing stirring. So sit down at the keyboard, put on the music you like (softly) in the background, and start writing anyway. Within a few minutes, you'll get into it and the ideas will begin to gel.

Think of it like working out. Think of all those days you don't want to do it, but boy do you feel better after you get it done. Simply put, if you want to be a professional, act like one.

I often listen to music—mostly instrumental (so the "words" of a song don't clutter my thoughts).  John Serrie and George Winston are a couple of my favorites. I also like yoga for clearing my mind—I strongly recommend the Living Arts AM YOGA with Rodney Yee. If that doesn't put you in a peaceful place, nothing will.

When I got my first rejection letter, way back in 1982, I called another writer, a local hero, Robert Cormier (I Am The Cheese, The Chocolate War). Bob was considered one of the most influential young adult authors of the 20th century, and rightly so. In our town, he was also known as the most generous and wonderful man anyone could ever know. He didn't know me—I plucked his phone number out of the phone book—but he spent more than two hours on the phone with me, picking me up and dusting me off after that rejection letter. He also gave me that one piece of advice which forever changed the way I look at storytelling: character is more important than plot. A great plot with lousy characters makes a mediocre book, but an average plot with great characters will have readers sitting on the edge of their seats.

I've never forgotten that. Bob and I became friends for many years until he passed on. We would often drop by each other's local book-signings to tease and say hi. When he passed, I took his place on our library's Board of Trustees.
Subscribe to our email list Explore Our Classes