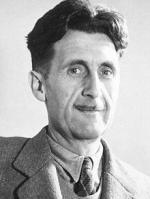 George Orwell has earned the right to be called one of the finer writers in the English language through such novels as 1984, Animal Farm, and Down and Out in Paris and London, and essays like "Shooting an Elephant."

Orwell excoriated totalitarian governments in his work, but he was just as passionate about good writing. Thus, you may want to hear some of Orwells writing tips.

A scrupulous writer, in every sentence that he writes, will ask himself at least four questions, thus:

And he will probably ask himself two more:

One can often be in doubt about the effect of a word or a phrase, and one needs rules that one can rely on when instinct fails. I think the following rules will cover most cases:

From Orwell's essay "Politics and the English Language."