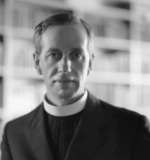 Ronald Knox was a mystery writer in the early part of the 20th century who belonged to the Detection Club, a society peopled by such legendary mystery writers as Agatha Christie, Dorothy Sayers, G. K. Chesterson, and E. C. Bentley. Among his novels: The Viaduct Murder, Double Cross Purposes, Still Dead.

Knox was also a Catholic priest, which is perhaps why he was tempted to write a 10 Commandments of detective fiction. If you write such stories, thou shalt obey these laws:*

*In truth, most of these rules have become outdated in current mystery fiction.